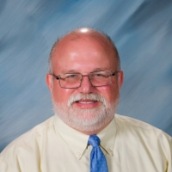 Fr. Tim became the Pastor of Good Shepherd Church in Huntsville in July of 2019. Previously he had been the pastor at St. William Church in Guntersville and at the Chapel of the Holy Cross in Albertville for 9 years. Prior to that he held varying church positions as a pastor and parochial vicar in the diocese since 2004. He has served on Several committees for the diocese including Human Resources, Priest Personnel, Defined Benefits for Priests, and Deposit and Loan.

He holds a BS in Social Welfare from the University of Wisconsin – Milwaukee. After 20 years in the business world and living in Birmingham, he began to study for the priesthood for the Diocese of Birmingham. He received Bachelor’s of Sacred Theology and Masters in Divinity degrees from St. Mary Seminary and University in Baltimore, MD in May of 2004.

Letter from the Principal